Find out more about our free 2 hours webinars here.

Find out more about our diplomas & programmes

Find out more about our business solutions.

Our diplomas & programmes > Our Accreditations > Upcoming Accelerator Events > What is coaching? > Contact Us >

In 2016 we saw 16 days of competition in the 2016 Olympics with team GB winning an impressive 67 medals, endured a 'Brexit' and witnessed Donald Trump winning the election as the next US president. If 2016 has proved anything it's that a lot can happen in the space of a year.

For me, 2016 has been an interesting year and I feel grateful to have experienced some extremely memorable moments. In November I was pleased to celebrate 8 years as MD of The Coaching Academy and It has been great to see Coaching go from strength to strength. Seeing so many of our Coaches making a positive difference to the lives of others is extremely rewarding.

This was reaffirmed at The International Coaching Awards where we were able to celebrate the amazing successes and achievements of each of our qualified coaches, including Life Coach Of The Year 2016 winner, David Hare.  Alongside the International Coaching Awards, I was also privileged to have had the opportunity to attend The Pride Of Britain Awards.

The Pride of Britain awards ceremony celebrates those who have overcome adversity, many of which have suffered severe disability by birth or tragic accidents resulting in life changing injuries and who have been self-sacrificing and incredibly brave to put the needs of others before themselves.

It was humbling beyond belief to celebrate the achievements of so many remarkable British people who are contributing to making the world a better place, even more so when many of us find ourselves in a world where we can grumble about the most trivial of things. When we compare ourselves to those who are dealing with real problems such as life threatening illnesses with dignity and bravery, It begs the question, are we doing enough to help our fellow human beings?

The pride of Britain Awards was wall to wall celebrities but there was one person I was keen to meet and that was  professor Stephen Hawking and yes I did ask for a selfie which I’m pleased to say he agreed to. Stephen Hawking is a person I really admire, not only is he one of the greatest scientists of our time, he is someone who has committed to surpassing all odds. Stephen has escaped the limits of his disability and trained his mind to work in a new way in order to pursue his passions. 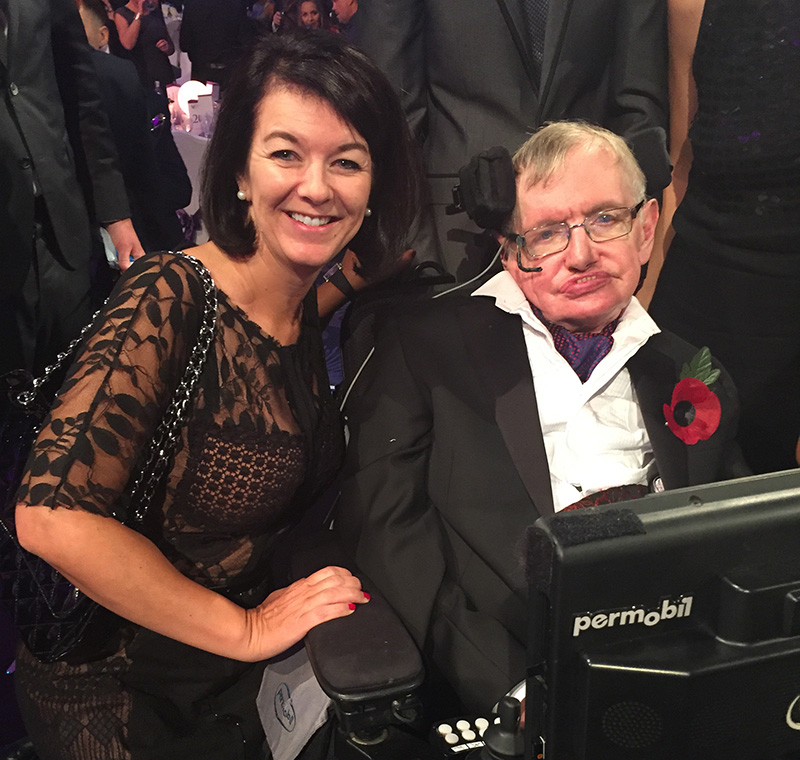 Stephen hasn’t allowed the challenges which he has encountered to stop him from going after what he wants, instead he has used his setbacks as fuel to keep pushing forwards and going after his goals. His undeniable determination has resulted in 12 honorary degrees, being awarded a CBE and receiving numerous awards, medals and praises for his contributions.

Stephen Hawking’s story is one that can inspire many of us to break through our own limitations in order to go after what we want and as we ease our way into the final days of 2016, now is the perfect time for us to press the pause button and reflect on our own achievements, lessons and successes for the year gone by.

Have you had a year full of podium moments where you’ve felt proud of your progress? Has it been a year of positive change and taking action? Or has it been a year filled with unfulfilled dreams and goals that are yet to be ticked off your to do list?

As the year draws to a close, we’re able to reflect on 2016, acknowledge our achievements, remind ourselves of the lessons this year has taught us and appreciate how much we’ve evolved. As we do so, we’re able to gain a clearer picture of what goals we’d like to set for the year ahead.

You may ask yourself:

And as you reflect on your milestones from 2016, you’re able to arrive to the question that will determine your next steps, Where do I want to be in 12 months’ time?

I’d like to take this moment to wish you a very merry Christmas and a happy new year from all at The Coaching Academy.

I’d love to know what your highlights from this year have been and what your goals for 2017 are, let me know in the comments below.

Want more from The Coaching Academy?

Fill in the form below to subscribe to our newsletter

Posted: 1577 days ago
The Gift of Compassion - Rasheed Ogunlaru

One of the greatest gifts that you can give to yourself - and everyone else - is compassion. During my life journey probably the most magical discovery or re-discovery has been compassion. It has been enriching to me and has helped me to appreciate, respect and help others. If you often find that you are afraid or numbed by life, compassion is likely to be the tonic that you need.

Posted: 1556 days ago
5 Ways To Turn Your Resolutions into Results

As 2017 rolled in, it brought a blank page of opportunity and a chance for us to create a fresh, new chapter in our lives. Now the New Year is well under way, how are your resolutions going? Are you still buzzing with excitement as you work towards the goals you want to achieve and are you taking the actions required to move you closer towards reaching your goals?