Find out more about our free 2 hours webinars here.

Find out more about our diplomas & programmes

Find out more about our business solutions.

Our diplomas & programmes > Our Accreditations > Upcoming Accelerator Events > What is coaching? > Contact Us >

On Saturday 10th December 2016 the red carpet was rolled out once again as Coaches, Trainers, Bev James CEO of The Coaching Academy, The entire Coaching Academy team and loved ones gathered together at Latimer Place to celebrate Coaching success.

Guests were greeted with a glass of bubbly before entering the dazzling Cormorant suite where dinner was served. After dining in style it was time for the main event. Host of the evening Director of Operations, Kris Robertson kicked off the event delighting attendees with his fun and light-hearted hosting, putting the nervous nominees at ease, followed by an inspirational speech from CEO of The Coaching Academy our very own Bev James.

After a warm welcome, introduced to the stage to announce the winner of The Best Newcomer of the Year 2016 award was Coaching Academy Trainer & Confidence Coach, Pam Lidford who presented the award to this year’s winner Ali Shaw. After a successful career in television presenting Ali Shaw attained a distinction in her Personal Performance Diploma and since qualifying has already made significant strides in getting her Confidence Coaching business up and running, alongside investing into expanding her skillset with continual professional development. 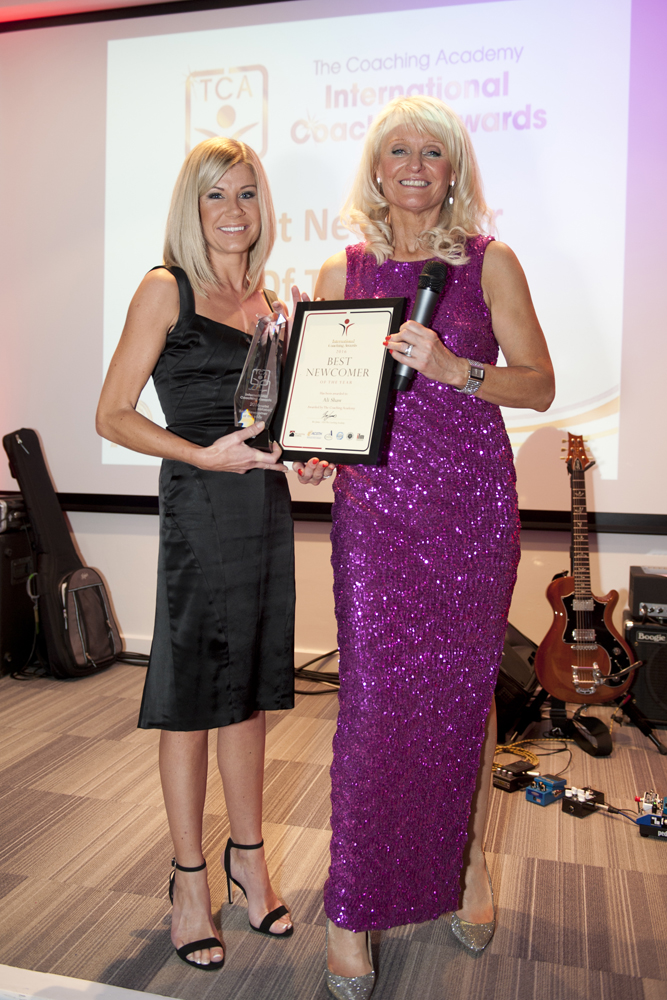 Welcomed to the stage next was Coaching Academy Trainer and Small Business Coach Merete Langler. Merete announced the winner of Small Business Coach Of The Year 2016 which was awarded to Rita Chowdhry. Rita has gone from strength to strength and has continued to grow her business with her unique trademarked framework ‘SAVVI’ - to facilitate positive change. Rita has gone on to help businesses develop their people, identify blind spots in how they manage and run their businesses through the power of coaching. She has worked with smaller businesses and larger well known ones such as the met police, KFC and Hallmark care homes. 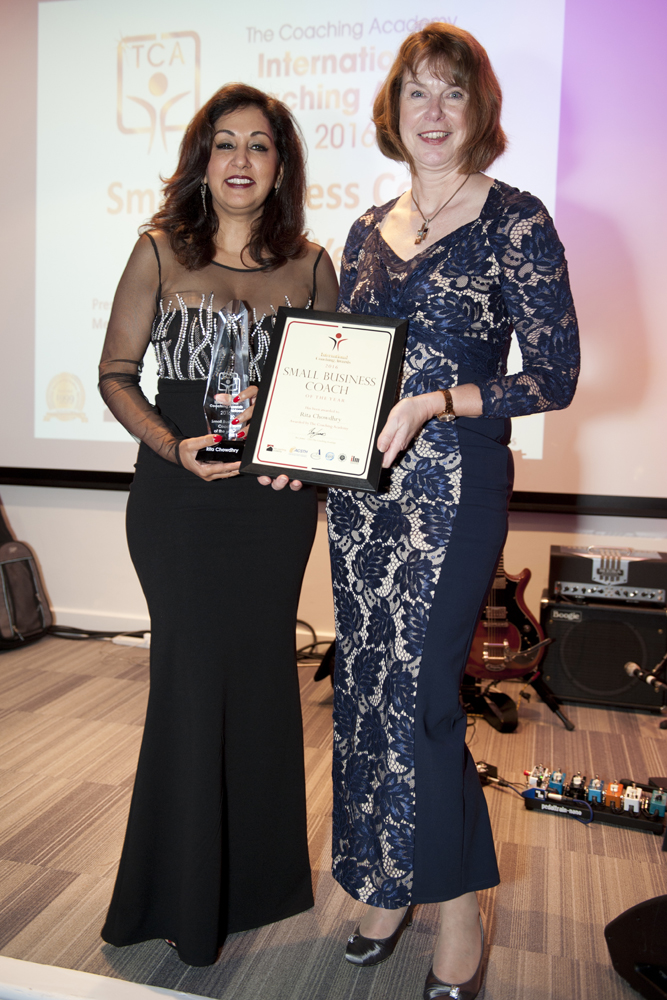 Presenting the next award ‘Executive Coach Of The Year’ was Coaching Academy Trainer, Corporate Image, Leadership & Management consultant Ann Skidmore. She presented this year’s award to Claire Cahill. Since qualifying in 2012 Claire has worked with a number of managers in small, medium and large organisations helping them to coach their teams more effectively, develop their skills and tailored workshops around their needs as well as recently publishing her book ‘Empowering Employee Engagement - How to Ignite your team for peak performance. Presenting the next award which is close to many of our hearts was The Coaching For A Cause Award. Presenting this award was Coaching Academy mentor, Steve Fox. Taking the award this year was Meg Batch. Meg has volunteered with an organisation called Active plus, who take wounded, injured and sick (WIS) military veterans on as volunteer facilitators. Clients come from a wide variety of sources, eg Mental Health organisations, self-referrals, Job Centre, GPs surgeries, local councils –with one thing in common – they are all at rock bottom. Welcomed to the stage next was Coaching Academy Trainer and NLP Master, Sarah Uruqhart. Sarah presented the NLP Practitioner Award to Miranda Adams. Qualifying as an NLP Practitioner in 2013 and specialising in healthy recovery for 12 years, Miranda underwent her own health challenges which inspired her to specialise in her niche and has since worked with people with illness and disability challenges in order to live a life of possibility. Called to the stage next was last years Life Coach of the year winner, Carolyne Crowe. Since winning last year’s award Carolyne has gone on to expand her business and was delighted to pass the baton to this year’s International Coach of the year winner, Christelle Maignan. Christelle has specialised in coaching freelance translators and interpreters and gone on to promote coaching in the translation industry. Since completing her Personal Performance Diploma she has gone on to further her study, is an active member of The ICF and has completed a number of CPD activities, making her this years International Coach. 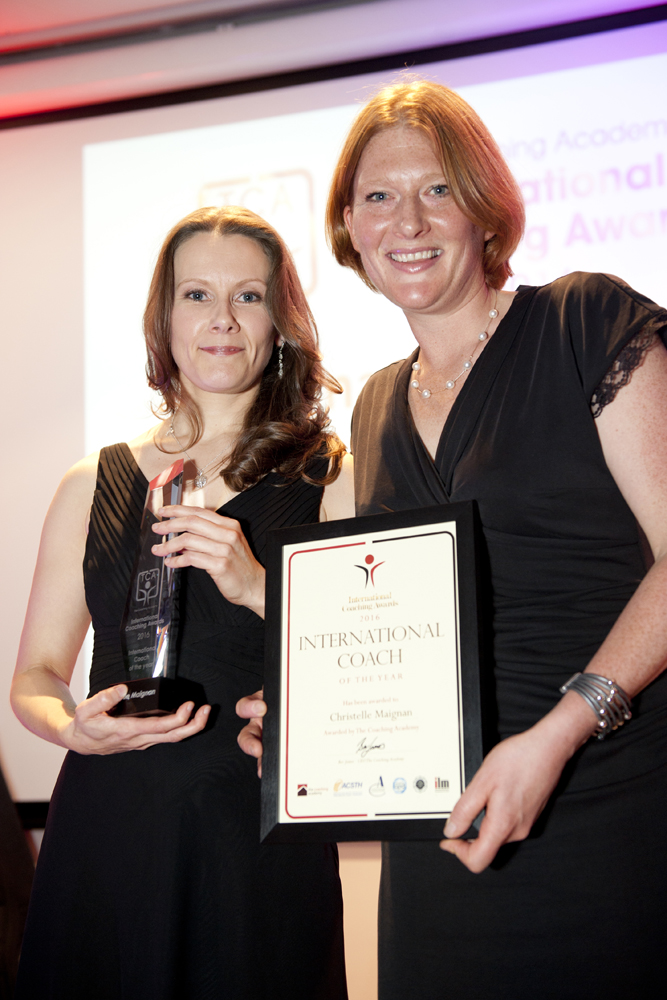 Presenting the final award of the night, Life Coach Of The Year 2016 was Bev James. Bev provided the audience with an inspirational few words that reminded us all to celebrate our podium moments and acknowledge our achievements. After her speech she was extremely pleased to present the award to David Hare who claimed the 2016 title as ‘Life Coach of the Year’. David works with both corporate and private clients across the UK and the world ranging from PR and logistics professionals, to start-up business owners and those from the film and theatre industries in the UK and Hollywood. His book ‘The Buddha in me, the Buddha in you’ was published by Penguin random house earlier this year helping many to explore the spiritual meaning in their lives, and as Life Coach of the year he will be able to spread his message to even more people. After the awards were presented, as a special treat we were delighted to acknowledge Carolyne Crowe with an Honorary fellowship of The Coaching Academy. Carolyne has gone on to achieve many wonderful milestones since qualifying with The Coaching Academy and we believe that she would a wonderful role model for many of our other Coaches who have qualified and are yet to complete their qualification. After Bev presenting the award, Carolyne provided us with a short speech where she shared some words of wisdom and the impact that Coaching has had on her life, to her clients lives and as her career. After the awards ceremony, Broadway star Ryan Molloy and his band took the crowd back in time and entertained the audience with spectacular singing and classic hits. His lively performance had guests in good spirits as we danced, sang along and celebrated The International Coaching Awards Ceremony 2016. The night was a wonderful way to celebrate ALL of our coaches and to inspire those who are on their journey to complete their qualification. We would also like to congratulate all those who were shortlisted for an International Coaching Award 2016, we are very proud of everyone who was nominated for an award, you are all an inspiration to The Coaching Industry and are making a real and lasting difference to the lives of others and for that we salute you!

Shortlisters for an International Coaching award for 2016 were:

We would also like extend our appreciation and thank you to all those who attended the evening and were part of a truly special celebration.

Want more from The Coaching Academy?

Fill in the form below to subscribe to our newsletter

Posted: 1590 days ago
Coach in the Spotlight - Ros Durrant

I attended the Coaching Academy's two-day free foundation in coaching course in September 2014 at a time of transition in my life. My children had left home and I was looking for a new challenge. With a background in Nursing and Careers Guidance, I was looking for something that would enable me to use all the skills, qualifications and experience that I had gathered over the years. I knew by the end of the 2 days training that Coaching was the way forward.

Posted: 1583 days ago
The International Coaching Awards 2016 - Meet the winners!

The International Coaching Awards 2016 was a fantastic evening to celebrate the success and remarkable achievements of The Coaching Academy Coaches. Well done to all the amazing Coaches who were nominated for an award. We're so proud to see that so many of you are doing wonderful work and are a real credit to The Coaching industry.