The Power of DISC Graph Reading  by Dave Pill

Wouldnt it be great to be able to look at this DISC graph and give your client feedback so accurately that they pause for a moment before they look at you and say, How could you possibly know that about me from those little dots on a graph?

More often than not, this is the reaction I get when I tell them what I see from those little dots on a graph.

If you would like to acquire this ability, your luck is in as I am running a DISC Accreditation day which is all about graph reading on Saturday 12th August in central London

I remember my first ‘big’ DISC client was landed specifically because of my ability to read the Graphs contained within the DISC report.

I was asked to attend a meeting with a large organisation with a head office based in Brussels to showcase the DISC online system and the reports that were generated from it. The person I was to explain it all to was a powerful individual who ran her team like a military unit. She was a D/C profile (in DISC terms), which means that she was very task orientated and I knew through my knowledge of DISC, that she wanted information immediately, quick fire and accurately. Time was important to her and she had no patience with anyone who could potentially waste hers! She read through some of the sample reports I took with me to the meeting and after a brief pause for thought she pushed them back across the very large desk towards me and said, “these reports are like a horoscope”. Obviously at this point I knew I had to be equally forceful whilst remaining respectful and went on to defend the power and potential of DISC. This was a no-nonsense individual who was sceptical and needed me to prove that DISC was a good as I said it was, and that it was a simple tool to use but was not simplistic. I offered to profile her immediate team of 15 persons to help make my case and she was keen to take me up on this offer. 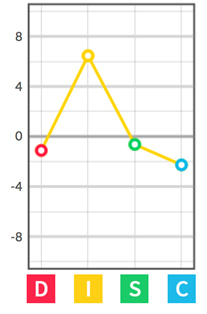 I sent her the links to the DISC questionnaire and she proceeded to ensure her team completed it overnight. The following day, I studied the report graphs in detail and soon realised that she must have instructed some of her team to try to ‘cheat’ the tool to prove her point. When I met her to go through the graphs I could tell that she was waiting to pounce but her demeanour noticeably changed when I worked through the reports, showing her the graphs and letting her know that this person tried to cheat the system, this one too and also this one. A wry smile appeared as she said, “very good”. One by one, I went through the graphs for her entire team, telling her all about these people she knew so well. How they would react under pressure, how they would prefer to process information, how they might go about achieving a goal or work through a task, their preferred pace, whether they were more outgoing, reserved, task or people orientated. My feedback was based solely on the graphs and was extremely accurate – I know this for a fact… because she told me! I then went on to feedback on her DISC graphs and this powerful matriarch was the first person to say to me:

“How could you possibly know that about me from those little dots on a graph?”

This was my first DISC challenge, my first DISC graph reading of a team and my first big DISC client. My first invoice to this organisation was for 65,000 Euros.

Without doubt, the ability to read the graphs was the key to unlocking this opportunity.

So… if you would like me to teach you how to read the graphs and share with you the knowledge I have gained during more that than two decades of using DISC and reading Graphs, you now can.

You will need to have attended the DISC Accelerator day with The Coaching Academy or the DISC Certification day for non-students to qualify for the DISC Accreditation day.

The Wheel of Life  From The Coaching Academy

The lifeblood for so many successful individuals is to have a goal-setting strategy. Its essential for them to know where they are going in order to know where to start.

Coach in The Spotlight  Rafael Pompeo

My story with The Coaching Academy started when I went to London in December 2013 and signed up for The Academys free 2-day Foundation in Life Coaching Course. I was amazed at how well organised the course was: the teachers, the infrastructure and the materials they gave us. All this care contributed to my first very good impression of the academy. Not to mention the fact that serving as a catalyst for peoples progress - one of the first things Kris Robertson said at that event - totally caught my attention. It was love at first sight!